Italy the Second Time Around: Fish Heads, Juggling Joggers and a Near Death Experience

I am not an itinerant world traveler. Indeed, at the age of sixty, I have recently completed just my second trip overseas.

Like the first trip three years ago, I primarily visited the country of Italy, with just a day trip into Slovenia, which it turns out, is pretty lovely and felt quite familiar, but more on that in another post.

And while this was my second trip to Italy, it was a journey that included some firsts for me.

For instance, I ate my first fish heads at a restaurant on the Venetian Island of Murano.

I watched Anthony Bourdain eat them numerous times and swore I would NEVER eat whole sardines with their glassy little eyes and pouty little mouths. Plus they must have bones, no?

Turns out they don’t have bones, or not any that I could detect, and once they are in YOUR mouth their mouths are forgotten. They are pretty tasty really. Not fishy at all. Who knew?

Bourdain knew. I just didn’t believe him. In honor of his memory, I had to try them, head first, in a tempura type batter and lightly fried, and it was really not gross at all. Just a slight crunch.

Murano is also famous for it’s blown glass, which is surprisingly sturdy, and takes considerable more effort to crunch, as illustrated in the showroom of the Ferro-Lazzarini Glass Factory Show room, where the hard sales pitch included the slamming of a very expensive and beautiful hand blown glass goblet onto the table top. Several members of our travelling group were impressed enough to buy some after that unnecessarily violent display, and a number of women purchased jewelry, but since the abstract glass sculpture I was intrigued by included a thirty thousand dollar price tag, I abstained from purchasing anything in that particular venue. Photos were not allowed in the showrooms. 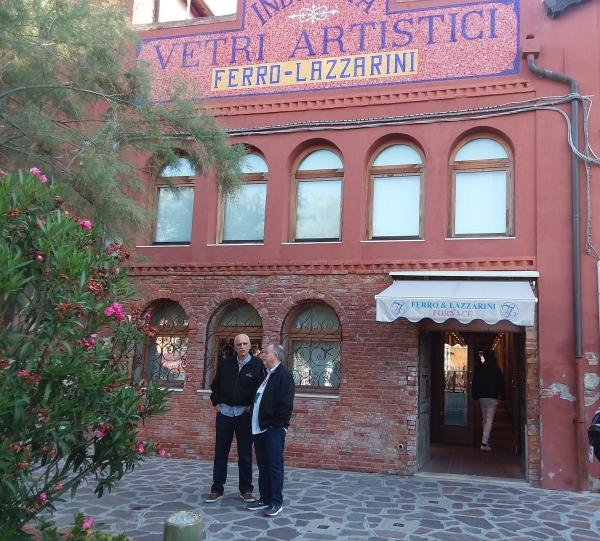 I encountered another first in the charming city of Parma, where our passionate guide Ugo shared more historical information about his small city, it’s monuments and it’s art than could possibly be digested at one time, which was how I felt about most of the meals I was served this trip. 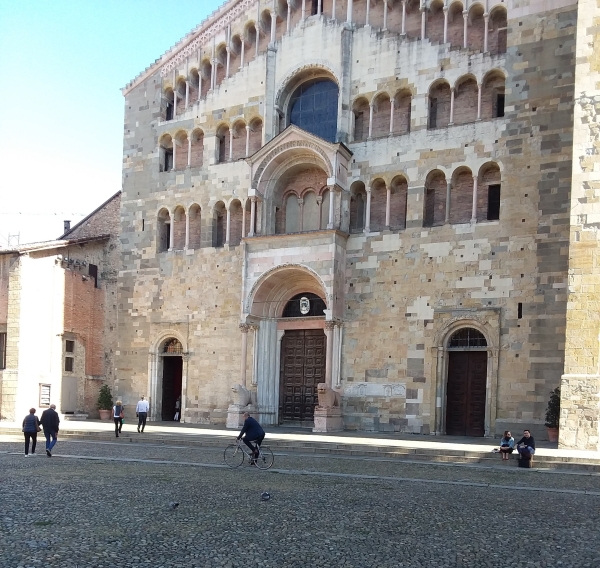 On the two consecutive evenings we were there, we reached our dining destinations by walking the wide tree lined paths of Parca Ducale, located just behind our hotel.

That is where we encountered the juggling jogger, first I’ve seen far as I can recall. Overachiever.

Parma was a lovely town, and the crowds there were very tolerable. They also produce awesome cured meats and parmesan cheese in this region of Italy. We spent a lovely afternoon there and ate in a small streetside cafe. It was very relaxing and welcome after the hustle of Milan.

On this trip, I also had my first near death experience. It was on the bus to some venue I really can’t recall due to the trauma. It’s not what you might expect. It really isn’t.

It’s just that I had to pee so bad, and I was so embarrassed, because we had only been on the bus for like half an hour. I tapped my sister in law in front of me on the shoulder and asked her to inform Carla, our tour director, in front of her, that I had to make a restroom stop.

Ten minutes later I was creeping up to Carla’s seat in the front to tell her that things were urgent. She spoke to Natale in Italian again. He spoke back. I sat down behind Carla.

Eventually I saw signs for a rest stop. We passed it…under construction…CLOSED.

We passed numerous pull off’s on the side of the road. Too small for the bus.

The minutes ticked by. Carla and Natale exchanged more words I couldn’t understand.

I began eyeing the bushes along the highway edges longingly, the way Cosmo often does as we are travelling. It was all I could do not to wimper like he does because he can’t pee on all those glorious bushes.

Then, finally, just as I approached the edge of wetness…

Photos by the author

As I exited the bus, Carla directed me to go to the restroom on the right. I was moving with the speed of a sloth due to the pain in my bladder.

It would have been a shame to have come so close only to die now, wouldn’t it?

A couple of other buses had pulled in and women were marching purposefully in the same direction.

I limped into the rest stop store, headed straight for the toilettes, and got in line behind nine or ten other ladies.

Next thing I know, Carla, our most awesome tour director, comes along side, takes my arm and gallantly leads me into the inner sanctum of the restroom as she explains in loud and authoritative Italian that this passenger has an emergency and needs the very next stall that opens up.

I love Carla. I also love the sweet German girl who shared some cranberry tablets with Carla for me, a kind of homeopathic treatment for bladder issues.

Carla saved my life. Or at least my dignity.

And while I didn’t find myself walking through a tunnel towards a bright light or see my dead relatives waiting for me as I walked to the restroom alone, or any of the other things that constitute a true Near Death Experience, I did think I was gonna die.

For a little while.

When I left that restroom, there were a couple of young German teens glaring at me, there were stern faced Italian women wondering who this overly demonstrative American was babbling “Grazie a tutti” as she exited the toilette and there were other women just lining up to wait their turn. I hope none of them were in distress.

Thanks to Carla, our most awesome tour director, a funny, smart and compassionate lady, I no longer was.