For a time we lived near the Puget Sound.

We would ride the shore roads into town, winding through tall trees and small neighborhoods with views across the water to the city. It floated there, a beacon of creative energy and industry and motion. It’s light at night cast a glow even we could see in the sky, from our five acre spread in the middle of the woods.

Boats the size of small factories make up the fleet of car ferries on Puget Sound. We rarely drove a car on the ferry, preferring to walk on and hoof it around the city.

En route we would walk the decks of the ferry from front to back and take in all the various views along the way.

The grays and rusty browns of the Puget Sound Naval Shipyard receded into the background as we pulled away from the Bremerton Docks.

To the west the blue line of the Olympic mountains ran like fine threads from north to south in the tapestry that was the West Sound environment.

We studied the beach houses–some quaint, some conspicuous–lining the shorelines of Sinclair Inlet, where children played, running from the waves in the ferry’s wake.

To the South, the great Tahoma–Mt. Rainier, with its snowy cap and icy steel-blue glaciers, filled out the view over Vashon Island. We passed close to shiny black seals, clinging to buoys or noisily hanging out around the fish pens.

As we rounded the curve of Bainbridge Island the view opened up to the city, the Seattle skyline dominating as you got closer to the ferry terminal. It’s really one of the most stunning cities when approached this way. I was quite taken with it from the first sight.

Sometimes we would take a ferry from Southworth to Vashon Island, and drive around the island stopping at parks, the light house, the coffee roastery and small shops in the center. We frequented a little restaurant there with tables that quite literally sat in the garden, among Lupines, Delphiniums and Rudbeckia. Across the street was a funky nursery with a good assortment of seeds and lots of flowering perennials and shrubs.

I never got tired of visiting the Island, small as it was, and often dreamed of what life on Vashon must be like, surrounded by water, trees and mountain views. How could it possibly be a bad life?

When we decided to unplug from the rat race, we sold our five acres in the green forest, and moved to the east side of Oregon. We felt ready for the change, having explored the arid landscapes and studied the real estate market for four or five years prior. 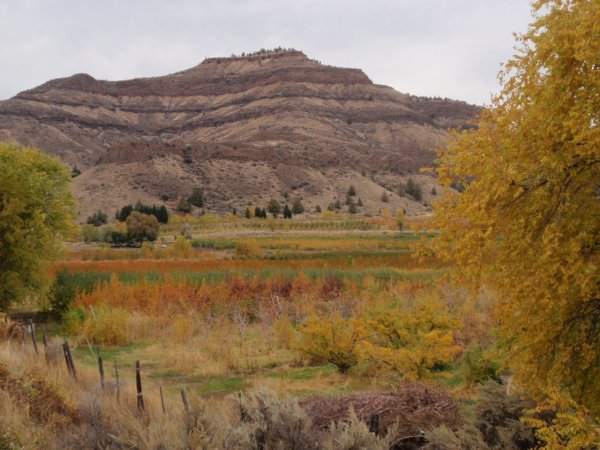 It was a very big change. One we thought we needed.

Some of the towns there felt like Mayberry RFD. Some felt like a movie set from an old western. We used to comment to one another that it was like going back in time four or five decades.

But just like in the movies, going back in time proved to be problematic. It’s a jolt to your psychic equilibrium. When the big gossip in town was that the new surgeon at the small hospital was black, I knew I was maybe not going to fit in well there.

Couple that concern with the deep sense of grief I felt over leaving the region I had dearly loved for the two and a half decades I lived there, and you have a prescription for some misery.

We lasted about six years. They were not the easiest years of our lives.

I think we both look back on it as a failed experiment–a costly mistake. Were it not for the good friendships we forged there we would be quite bitter, at ourselves, for making such a misguided choice.

We are back on the west side of the cascades again, and feeling more at home. We live fairly close to Mt. St. Helens. Mt. Rainier is an easy day trip, as is the Pacific Ocean, or Portland, Oregon.

It’s green here, and quiet. We enjoy being back in the forest.

But we both miss that big, blue, inland ocean we so happily settled near when we migrated from the east coast for a Boeing job. There are not a lot of environments in America that have so much to offer, if you are inclined towards mountains, salt water, forests, wildlife, and incredible views. The coffee’s pretty good too.

I don’t know if I will ever get to live near enough to Puget Sound again to regularly explore its shores or troll its waters by ferry. I’d like to think that I might someday.

For now, it’s good to sit and remember what a nice life it was, living across the water from the Emerald City. Everybody should be so lucky, to have such fine memories. It’s the stuff daydreams are made of.