In the Event of Nuclear War, I’ll Be at the Beach

I don’t know why it’s so hard to write witty little blog posts anymore. I mean geez, it’s not like any of those North Korean missiles Kim Jong Un is hurling at the Pacific can actually reach the west coast…yet.

Of course I haven’t lost my sense of humor completely. My husband and I have even taken to joking about it when ever we hear unusual sounding aircraft noises overhead. Our new favorite buzz word?–FAIL SAFE!

For a while I was thinking positive thoughts about it, as in, “I live near enough to the joint Army/Air Force base to be near ground zero, it won’t be any worse than the final few seconds of the movie.   Until I checked with Wikipedia. Imagine my dismay when I learned that “death is (only) highly likely if caught in open terrain within a 0-3 km radius of a one mega-ton air burst, and the 50% chance of death from the blast extends out to ~8 km from the same 1 megaton atmospheric explosion.” Well damn, I’m at least 40 miles as the crow flies. How depressing.

And it really complicates things. Instead of sudden and certain death, which doesn’t worry me, I  now have to worry about things like radiation burns, radioactive fall out, crop and water supply contamination,  conflagration, and being witness to acute human suffering and environmental degradation. The good news is that the neighbors have three years of canned food stashed away so we can always barter some of my silver jewelry for canned peas and corn. Piece of cake! Unfortunately I think the ice cream will probably be melted, but you can’t have everything.

So I’ve come to the conclusion that the absolute best place to be in the event of a nuclear attack is camping at our favorite beach! It’s where we spent election day last November, after mailing in our ballots early of course. Everything was awesome. No television, no newspapers, no social media. We avoided any social contact with other campers beyond a wave of the hand and a smile, (we’re really good at that stuff). We ate goat cheese brownies from the hippy store. We walked on the beach everyday until our legs ached, and then we sat on the beach and watched the sun drop behind the stretched out ridge of the Olympic Mountain range. It was me and the old man and the dog, along with a handful of curious harbor seals, and a couple of bald eagles. 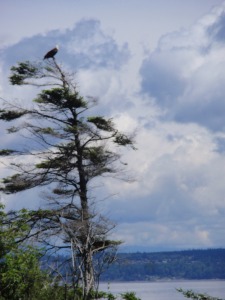 We had two of days of pure bliss. Then, at 6 am the morning after the election, I received a text message from the east coast: The end of days are upon us, (which in hind sight, might have really been a prophetic utterance).

I didn’t know at the time if Donald Trump had been elected as President, or if Hillary had and armed militias were storming the White House. Either way, the bliss was over. It’s never really returned.

In some ways DT has turned out to be even worse than I imagined. I hoped he might actually pull together a team that could run the White House and interact with the Legislative Branch on an adult level, but no, that hasn’t happened yet. And as bad as I knew he might be,  I never expected him to play verbal chicken with the imbalanced maniacal supreme leader of North Korea the way he has. I guess a lot of people thought he might actually stop tweeting stupid things and saying stupid things and doing  stupid things when he got into the office, the way a lot of women think that their stupid boyfriends will start acting better once they become stupid husbands, but of course, they don’t. That’s just plain stupid thinking.

I pray that this raging rutabaga doesn’t push the wrong buttons with the supreme asshole in North Korea. If he does, and bombs fly, his faithful will more than likely find a way to blame it on Hillary or Obama, because that is how they roll, but some of us know better.

As for me, if I have anything to say about it, I’ll be at the beach. The one sandwiched between the Naval Air Station and the Naval Ordinance Magazine, hoping to be at ground zero, because the final episode of that reality show is one I’d rather not be around to watch.